The UNIFY FOREVER Lineup is Here!

Welcome back to UNIFY. 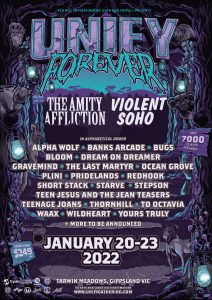 PLUS MORE TO BE ANNOUNCED

Not only one of the biggest metalcore acts in the country, but also internationally, The Amity Affliction will take over UNIFY’s stage for a monumental performance hot off the back of their latest album, Everyone Loves You… Once You Leave. The Amity Affliction have served up three gold-certified albums and one platinum in Australia, with four records hitting #1 on the ARIA Albums Chart. UNIFY will be the band’s second show since the release of Everyone Loves You… Once You Leave in February 2020. The Amity Affliction headlined the first ever UNIFY back in 2015, so it’s only fitting they return to the stage for what is sure to be one of the biggest instalments of the festival yet. UNIFY sold out within 72 hours the last two times that The Amity Affliction headlined, so be ready when tickets go on sale today!

One of the most iconic rock bands in Australia, Violent Soho screamed their way into public conscience with their highly acclaimed LP, Gold accredited Hungry Ghost. It came in a hail of riffs and ‘HELL F*CK YEAH’s scrawled on arms, desks, and bathroom walls the world over with ‘Covered in Chrome’ becoming an anthem for music fans everywhere and landing #4 on triple j’s Hottest 100 of the Decade. 2016 LP WACO followed suit, debuting at #1 on the ARIA albums chart, garnering another Gold certification, coming first in triple j’s Top 10 albums of the year and winning two ARIA Awards (Best Group & Best Rock). Violent Soho cemented their legendary status with the release of Everything is A-Ok in April last year, again debuting at #1. UNIFY 2022 will be the band’s second performance since the iconic album and will be the first time Violent Soho have played the festival since their colossal set in 2017. Get ready to release all that pent-up energy when they take the stage.

Joining The Amity Affliction and Violent Soho is a smorgasbord of homegrown heroes. With first time UNIFY performances from fourteen out of the twenty-three artists on the lineup including the likes of Alpha Wolf, Teenage Joans, PLINI, BUGS, Short Stack, Stepson, RedHook, BLOOM & more! Plus, return appearances from heavyweights such as Ocean Grove, Thornhill, Yours Truly and WAAX – all of whom have blown up enormously since they last stopped by Tarwin Meadows.